Algebra students are often compelled to memorize the following jumble of symbols:

Every adult I meet seems to remember this equation. Some quote it proudly. Others recall it grudgingly, fists clenched. Some people sing it (to the tune of “Pop Goes the Weasel,” though the rhythm’s a little forced). Many believe it captures the essence of mathematics: mystical formulas, taught to everyone, comprehensible to few.

I’m ambivalent. I can’t deny the quadratic formula’s usefulness, but I can’t let its tyranny go unchallenged, either. This formula has planted itself, like a virus, in the minds of otherwise healthy adults. Our society demands that its members know this equation, but makes no mention of its context, its uses, its colorful history.

I come not to praise the quadratic formula, nor to bury it, but merely to shed a few rays of light. What is it for? What is its story? And where on Earth does it come from?

We begin with the polynomial – a special type of mathematical expression that looks something like this:

Mathematicians love polynomials. Over the centuries, they’ve spent hours inspecting them, toying with them, bending them different ways to see how they change. They’ve also devised a classification system (based on the highest power of x that appears):

And so on (although the polynomials of degree 6 and higher don’t get cute nicknames).

Nevertheless, mathematicians have devised foolproof ways to solve such puzzles – at least, for the lower degrees.

1st-degree polynomials have only one solution. It’s so easy to find that most people, given a little training, can do it in their heads.

2nd-degree polynomials have two solutions. They can be found using the quadratic formula that you know and love (or don’t love). 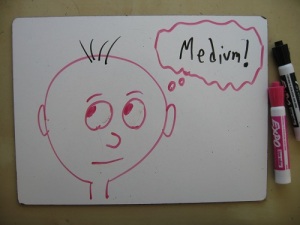 3rd-degree polynomials have three solutions. Again, they can be found using a formula, though the cubic formula makes its quadratic cousin look quaint and simple by comparison.

4th-degree polynomials have (can you guess?) four solutions. The quartic formula, though, is prohibitively complicated: it would fill two chalkboards, and bore everyone in the audience to the point of salty, math-induced tears.

Anyway, that’s what the quadratic formula is for: solving 2nd-degree polynomials. We memorize it because it occupies a pleasant middle ground between the simple 1st-degree case (which is too easy to bother memorizing) and the dizzying 3rd– and 4th-degree scenarios, whose daunting formulas would exhaust and perplex even the most patient souls. The quadratic formula is hard enough to demand effort, but simple enough to master.

Besides, while 2nd-degree polynomials may not appear on your tax forms or credit card bills, they pop up all the time in math, physics, economics, and other sciences – often enough, at least, to make the formula worth committing to memory.

You may notice that I mentioned quadratic, cubic, and quartic formulas, but not a quintic formula. Is it even more complicated?

Not exactly. 5th-degree polynomials do have 5 solutions, as you’d expect. But there’s no similar formula for finding them, and there never can be. Quintic polynomials present an unwinnable game, a puzzle whose answer is somewhere out there, but which our old methods can never quite pinpoint.

The discovery of this fact – that quintic polynomials cannot be solved by any algebraic formula – is one of the great tales of mathematical history. It stars an irresistible protagonist: a boy genius, drawn into French revolutionary politics, spurned by his one true love, and slain in a duel before he reached the age of 21. His name was Évariste Galois.

Evariste was no head-in-the-clouds intellectual. As a teen, he joined a group of radicals, defied the monarchy, even served time in prison. Along the way, he fell for a woman named Stéphanie-Félicie – a French heartbreaker’s name if I’ve ever heard one – but found his affections unrequited. Even so, one day he found himself challenging a rival to a duel in order to defend the lady’s good name. 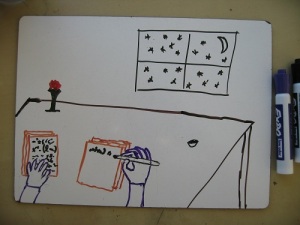 Legend has it that the night before his fatal duel, Galois glimpsed his own mortality. He feared departing our world without sharing his mathematical discoveries. So he worked until dawn, his quill scribbling furiously, committing to parchment all his ideas and breakthroughs. The next morning, a bullet pierced his belly. His last words, to his brother: “Don’t cry, Alfred! I need all my courage to die at twenty.”

Those notes – the ones he scrawled out by the early-morning lamplight – live on. Among them was the answer to the riddle of the quintic polynomial. We call those notes Galois Theory, and teach them to mathematicians across the world.

It’s beyond me why I memorized the quadratic formula as an 8th grader, but didn’t hear the tale of Galois until college. If you ask me, the latter might just enrich the mind more than the former. Don’t let anyone ever tell you that math isn’t romantic.

Here, then, is why I wish death to the quadratic formula: Because mathematical truths are not handed down by decree from on high.

The quadratic formula has become a sad emblem for how most people see math – formidable, alienating, and beyond the common man’s patience or intelligence. In the popular imagination, mathematics is at once tedious and bewildering, a tree that’s nearly impossible to climb and which bears no fruit even if you do. This quadratic formula – an inscrutable symbol of academic oppression; an ugly, pointless relic of years spent bored in math classrooms – this quadratic formula must die.

And here, too, is why I wish long life to the quadratic formula: Because mathematical truths do come from somewhere.

Mathematical truths emerge naturally, from the patterns of logic, from the laws of nature, and from mortal men and women who, amidst this tumultuous life of duels and revolutions and scorned love, carve out an evening or two to solve puzzles by candlelight. The quadratic formula is a part of history like any other, a piece of technology perfected a millennium ago in India, and which no one in the intervening centuries has managed to improve. Long live this quadratic formula – a fundamental truth; a product of labor and logic; a slice of the human experience.