Once at a picnic, I saw mathematicians crowding around the last game I would have expected: Tic-tac-toe.

As you may have discovered yourself, tic-tac-toe is terminally dull. There’s no room for creativity or insight. Good players always tie. Games inevitably go something like this: 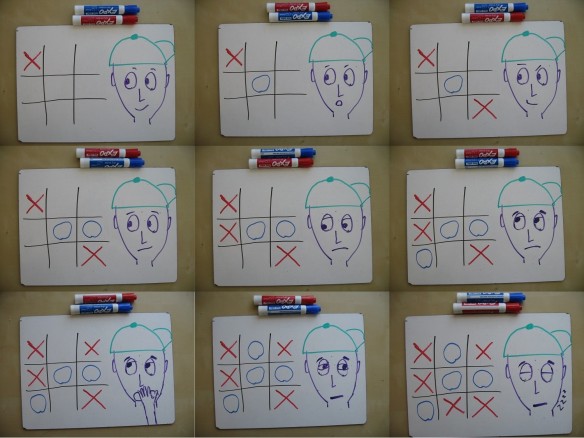 But the mathematicians at the picnic played a more sophisticated version. In each square of their tic-tac-toe board, they’d drawn a smaller board: 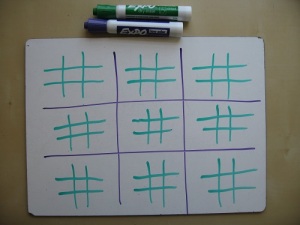 As I watched, the basic rules emerged quickly.

But it took a while for the most important rule in the game to dawn on me:

You don’t get to pick which of the nine boards to play on. That’s determined by your opponent’s previous move. Whichever square he picks, that’s the board you must play in next. (And whichever square you pick will determine which board he plays on next.) For example, if I go here…

Then your next move must be here…

The resulting scenarios look bizarre. Players seem to move randomly, missing easy two- and three-in-a-rows. But there’s a method to the madness – they’re thinking ahead to future moves, wary of setting up their opponent on prime real estate. It is, in short, vastly more interesting than regular tic-tac-toe.

A few clarifying rules are necessary:

When I see my students playing tic-tac-toe, I resist the urge to roll my eyes, and I teach them this game instead. You could argue that it builds mathematical skills (deductive reasoning, conditional thinking, the geometric concept of similarity), but who cares? It’s a good game in any case.

One final note: I have devised a strategy that I have (im)modestly dubbed THE ORLIN GAMBIT. You begin by taking the very center square.

O will take one of the other squares. 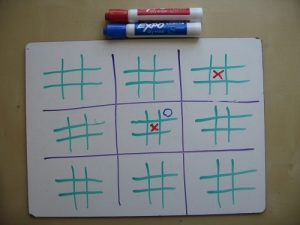 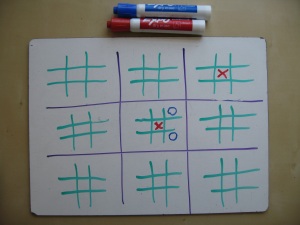 O grabs a three-in-a-row, laughing at your stupidity.

Take the center again. O will grudgingly realize that there’s no way to stop you. 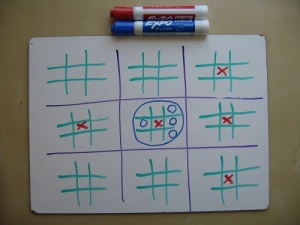 When all is said and done, X has sacrificed the center board in exchange for superior position on the other eight. It’s by no means a perfect strategy. It stings to lose that center board without a fight. But forcing so many O’s to cluster uselessly together on one board gives X the upper hand for the rest of the game.