Advertisement: In 2019 I did some consulting for a test prep site called Olive Book. Usually I find test prep depressing (it’s the apotheosis of education-as-competition) but in this case I’m proud of the project and the work. Worth checking out if you’re preparing for the ACT. Enrolling through this link will save you $5, plus I get a few bucks for the referral.

In November 2017, as part of a reader survey, I asked: “What other web site do you consider most similar to Math with Bad Drawings?”

I had planned to keep the answers for my own selfish perusal. But several folks asked to know what others said, and as a mere weathervane spinning in the winds of popular opinion, I am powerless to resist. So here you go.

As it turns out, there is a simple answer: xkcd. 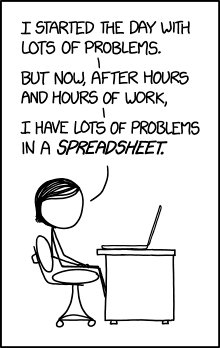 In all, xkcd got 150 votes (if you include things like “xkcd?” and “xkcd maybe? but also not really”), ten times more than the runner up. That makes sense. It’s a bit like I held up a 6-inch model of the Statue of Liberty, and asked you what other statues it most reminded you of.

After that, the most popular answers were:

6 votes: Wait But Why (a long-form stick-figure-illustrated explanatory blog)

Beyond that, a handful of sites got three votes each: Hyperbole and a Half (the funniest bad-illustrated blog around)

dy/dan (the blog of math teacher Dan Meyer, fountain of 1000 great ideas and host of 1001 wonderful discussions in the comments)

Here is the complete list of other recommended sites, loosely organized by category, and weeding out the inexplicable ones (the BBC?). Anything that received multiple votes is bolded.

WEBCOMICS
(if you’re here for the jokes)

MATH
(if you’re here for the Greek letters)

MATH EDUCATION
(if you’re here for the teacher chats)

YOUTUBE CHANNELS
(if you secretly prefer video to stick figures)

COMPUTER SCIENCE
(if you are a traitor to math)

MEMES
(if you are a child of the interwebs)

BLOGS
(if, unlike the interweb children, you actually like to read things)

If you’ve got other suggestions, feel free to leave them in the comments below! Please suggest only others’ sites, not your own – I think a list of endorsements will be more useful for people than a list of classifieds.