Or, Humility in the Face of Weirdness

You’re on an alien spaceship orbiting the planet Newcomb. Don’t worry—the air is perfectly breathable. They’ve even got magazines in the waiting room.

As part of their research into human behavior, the aliens have placed two boxes in front of you: a transparent box containing $1000, and an opaque box, whose contents remain a mystery.

It seems obvious. You’d be crazy to leave the guaranteed $1000 behind, right?

We made a prediction about your behavior. We won’t tell you what we predicted, but we will tell you that in this experiment, we fill the opaque box based on our prediction for each human.

If we predict the human will take only the opaque box, we put $1 million inside (to reward the human’s restraint).

But if we predict that the human will take both boxes, then we leave the opaque box empty (to punish the human’s greed).

We made your prediction earlier today, placed the correct amount in the opaque box, and sealed it. The choice is now yours. Will you take both boxes, or will you take only the opaque?

The classic answer to this question—from mathematicians, economists, and other rational-minded folks—is to take both boxes. After all, your actions now cannot affect what the aliens have already done. No matter what’s in the opaque box, you’ll be $1000 better off if you take the transparent box, too. So you might as well take it.

This is a hypothetical world that contains semi-psychic aliens and million-dollar boxes. It seems to me that the humble thing to do is to respect our lack of understanding about extraterrestrial matters and leave the transparent box behind, rather than trying to squeeze an extra $1000 out of an already quite generous alien. (Besides—if the aliens are observing you right now, and you commit to taking both boxes, they’ll know, and won’t give you the million.) 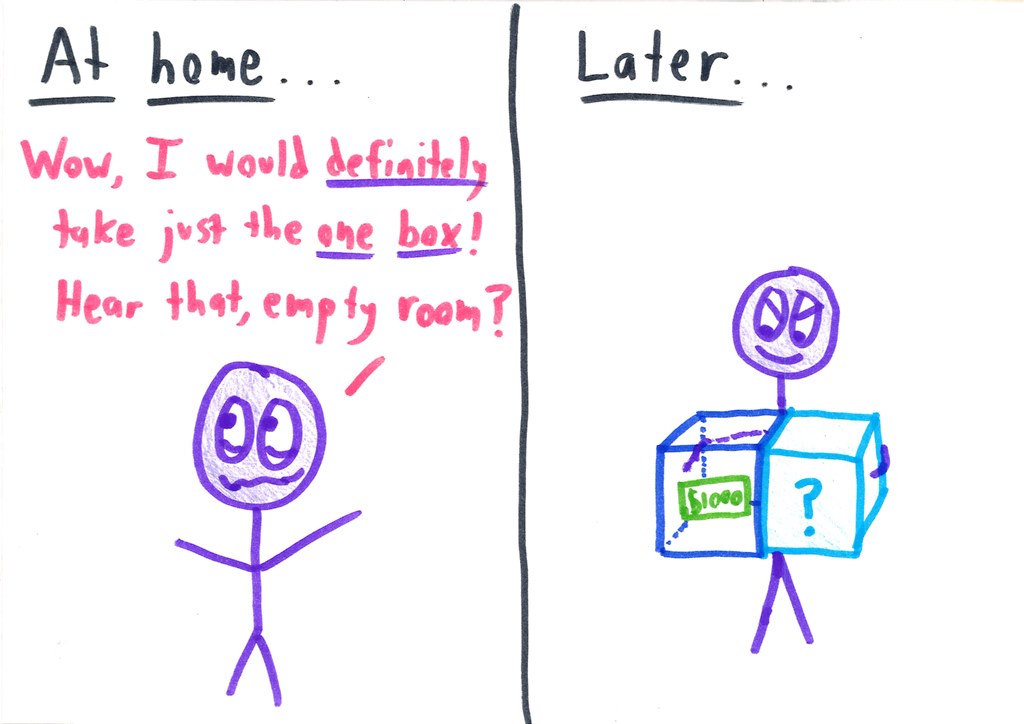 Such alien game-show scenarios are admittedly hypothetical. (Though if you’re observing me, aliens, I’m sorry I called you hypothetical.) Even so, we often encounter systems and situations in life that are nearly as foreign to our experience and intuition. Sometimes, we respond to these bizarre or unfamiliar scenarios with the greedy profit-maximizing approach of an economist or a Ferengi from Star Trek. But these are precisely the situations where a little caution and humility go a long way.

Given a morsel of information, we often try to scheme and optimize. We rarely consider the 4000 facts that we don’t have. To quote the satiric film In the Loop: “In the land of truth, the man with one fact is king.” We ought to stop—or at least take a brief pause—to consider the multitude of things we don’t know, and the distinct possibility that our entire framework is wrongheaded.

I say leave the transparent box. Will you really regret leaving $1000 on the table, when you’ve got $1 million to play around with?

20 thoughts on “The Newcomb Paradox”