This year, I’m teaching younger students than I’ve ever taught before. These guys are 11 and 12. They’re newer than iPods. They watched YouTube before they learned to read.

And so, instead of derivatives and arctangents, I find myself pondering more elemental ideas. Stuff I haven’t thought about in ages. Decimals. Perimeters. Rounding.

And most of all: Multiplication.

It’s dawning on me what a rich, complex idea multiplication is. It’s basic, but it isn’t easy. So many of the troubles that rattle and unsettle older students (factorization, square roots, compound fractions, etc.) can be traced back to a shaky foundation in this humble operation.

What’s so subtle about multiplication? Well, rather than just tell you, I’ll try to show you, by using a simple visualization of what it means to multiply.

Multiplication is making an array.

And if you think of multiplication as “groups”—that is, 5 x 3 means 5 groups of 3, or 3 groups of 5, then even more great! That’s also the same thing.

Now, what’s the benefit of this visual model? Ah, where to begin! Without it, you’re multiplying from behind a blindfold. Tear that cloth from your eyes, and begin to see!

Take the distributive property, a seemingly opaque bit of symbolism that says a(b+c) = ab + ac. Its misuse haunts algebra teachers’ nightmares. But it’s no mystery—just a simple fact about adding two arrays together. 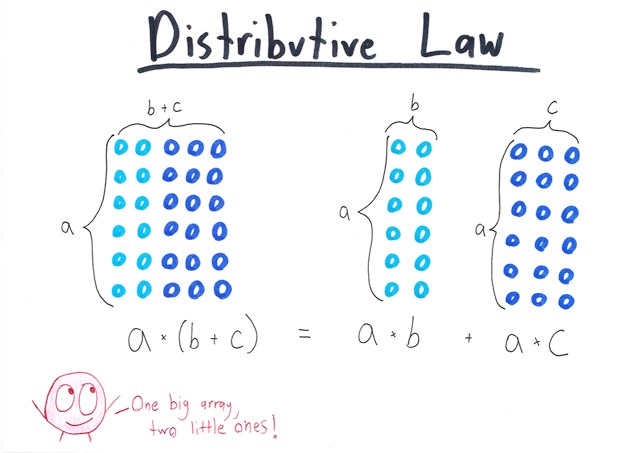 Or what about the prime numbers, those invisible atoms of the mathematical world? Well, under this view, they’re as pleasingly tactile as moss on a stone.

First, composites (the opposite of primes) are numbers that can form arrays. 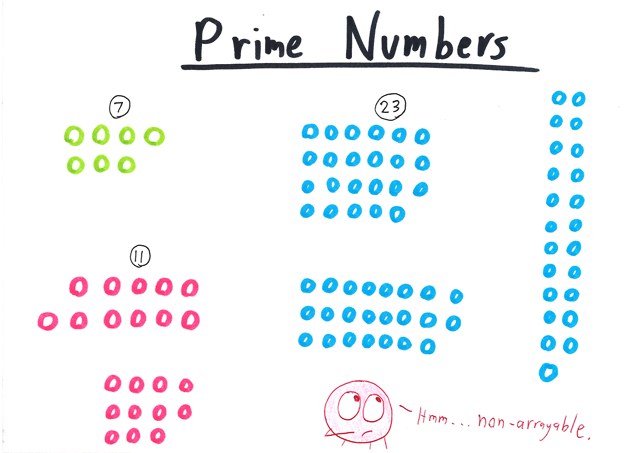 By the way, why isn’t 1 prime? (It’s a fact that confounds students, and “because we want prime factorization to be unique” isn’t a satisfying answer.) Well, visually, it doesn’t quite fit either pattern. It can’t form an array of smaller numbers, so it’s not composite. But it isn’t an awkward misfit like the primes. It’s just an indivisible little unit. So it’s neither prime nor composite.

Ever heard the word “commutative”? It means you can switch the sequencing of an operation without changing the outcome. For example 5 x 3 = 3 x 5. And this makes perfect visual sense for multiplication, because rotating the array shouldn’t change its size. 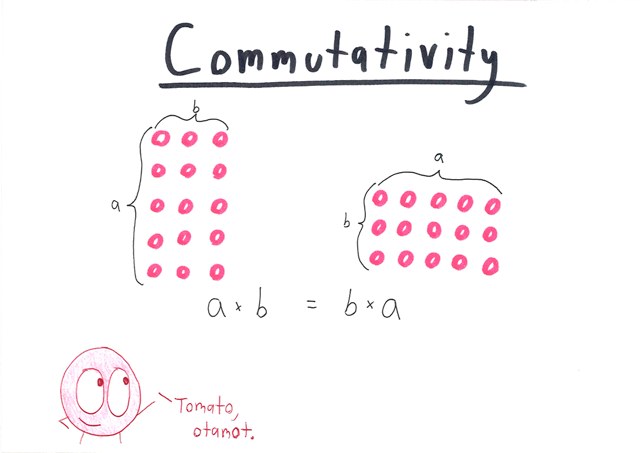 We can dig deeper. A “factor” or “divisor” of a number is a side length you can use for its array. 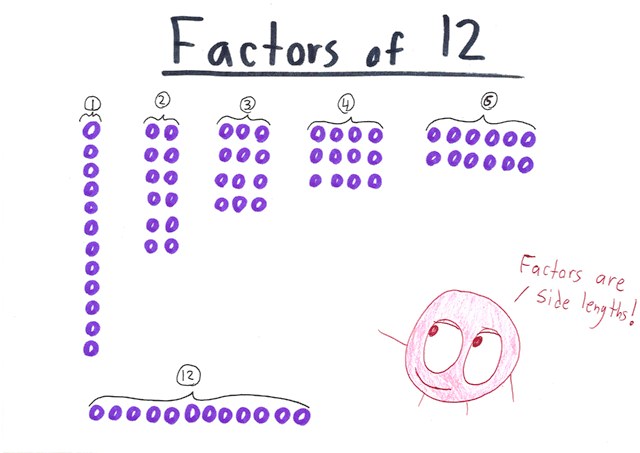 And a “common factor” for two numbers is a width that they share. It lets you combine them into one larger array. 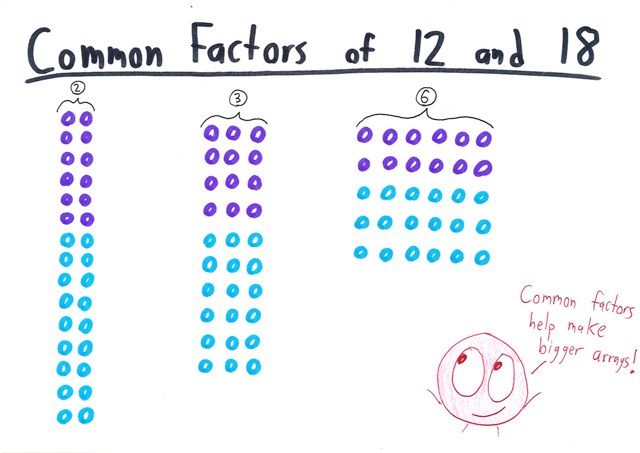 Similarly, a “multiple” of a number is a larger array that contains multiple copies of it.

And a “common multiple” of two numbers is an array inside which they can each fit repeatedly, like tiles.

On a simpler level, why is it called squaring a number? Because it makes a square! 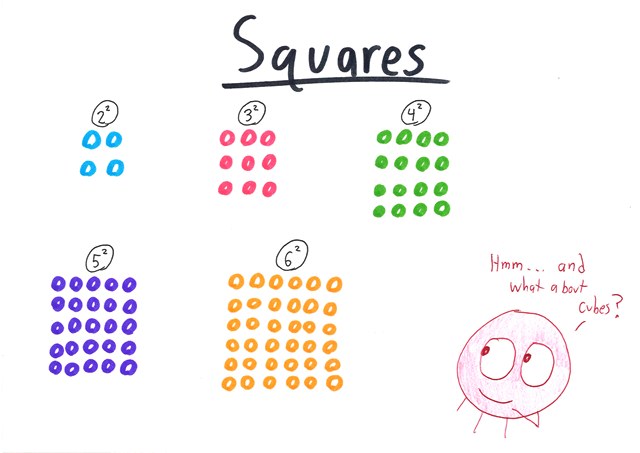 We can take this further. Replace your dots with squares.

Suddenly, we’re talking about area. We’re looking at the formula for the area of a rectangle, from which we can derive all other basic area formulas. 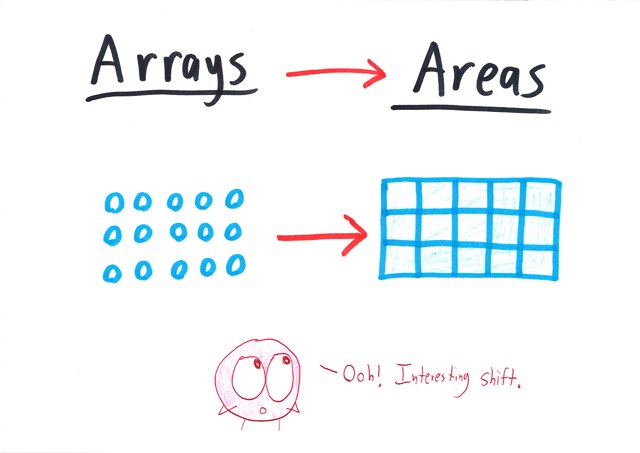 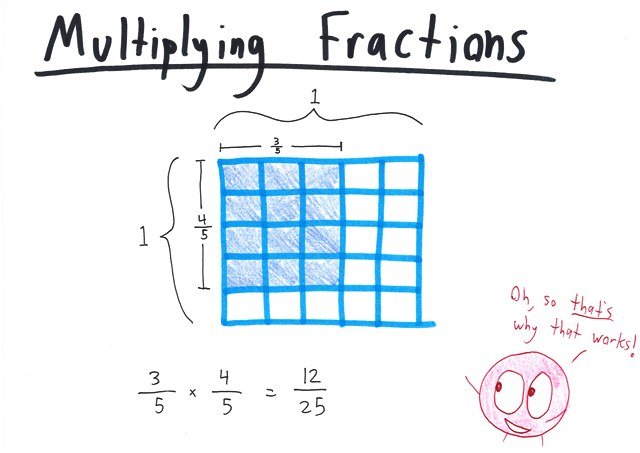 I find mixed success when inflicting drawings like these on my students. A few Y9’s are so excited they practically leap out of their seats. Others squint skeptically. “So you want us to draw a picture every time we multiply?” they ask. “Isn’t that a waste of time?”

“Do you ever use these?” they ask.

“No,” I say. “I don’t.” Fluency means taking simple steps mentally, without resorting to fingers or scratch paper. A kid who can’t use the distributive property in his sleep is as doomed as a kid who doesn’t know 9 x 4 = 36.

“So why do these pictures matter?”

They’re an early-stage ingredient. When you’re first developing a concept, they’re something you throw into the batter. Later, when you think about multiplication, you’ll rarely need to draw these pictures. Their flavor will have suffused your understanding, like vanilla extract baked into your cookies.

But trying to add this visual understanding later is often fruitless. You can’t pour vanilla extract over the top of your finished cookies. The concept is done baking.

For now, I’m enjoying my days with the young’n’s, these kids who are younger than the Euro. It’s never been so fun feeling so old.

71 thoughts on “The Sixth Sense for Multiplication”