It’s the very first on the Nobel Prize’s list of frequently asked questions: Is there a Nobel Prize in Mathematics?

Alas; it turns out that Alfred Nobel didn’t much appreciate the icy abstractions of mathematics. And before you ask, there’s no prize for computer science, either. 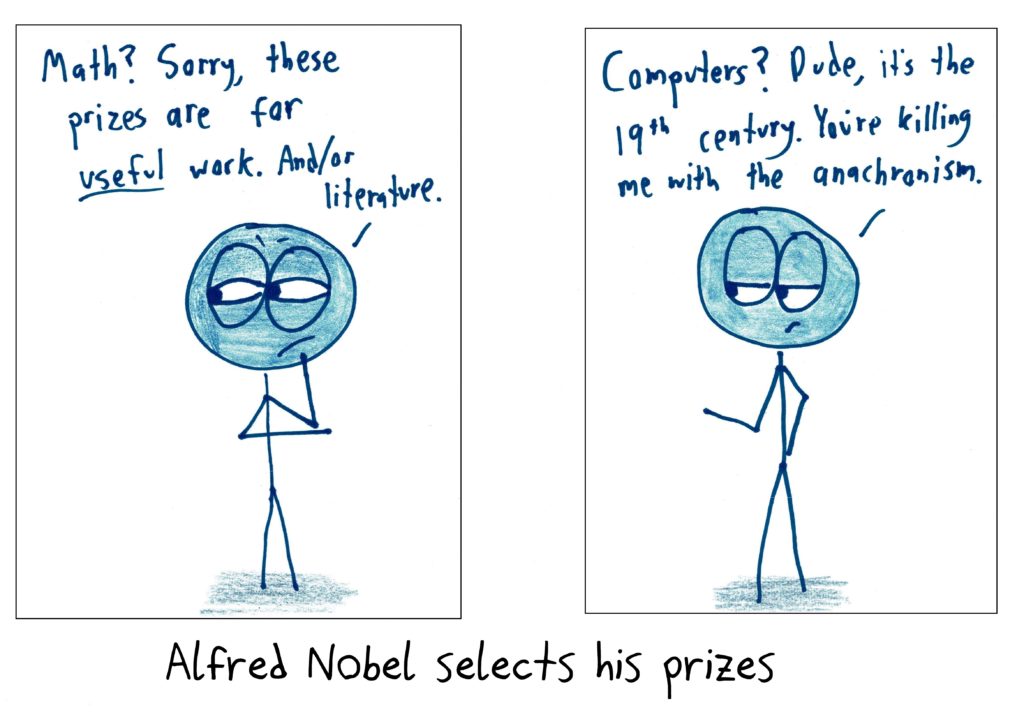 Faced with this emphatic snub, what’s the best response for the math/CS community? Should we pout? Throw tantrums? Pen angry, tear-stained letters to the King of Sweden? Gossip that Nobel was just jealous because his fiancée slept with a mathematician (fact-check: probably false)?

Though not above juicy gossip, the math/CS world has mostly pursued a different solution: Give fancy prizes of our own. Today, these five prizes rank among the highest in math and computer science: 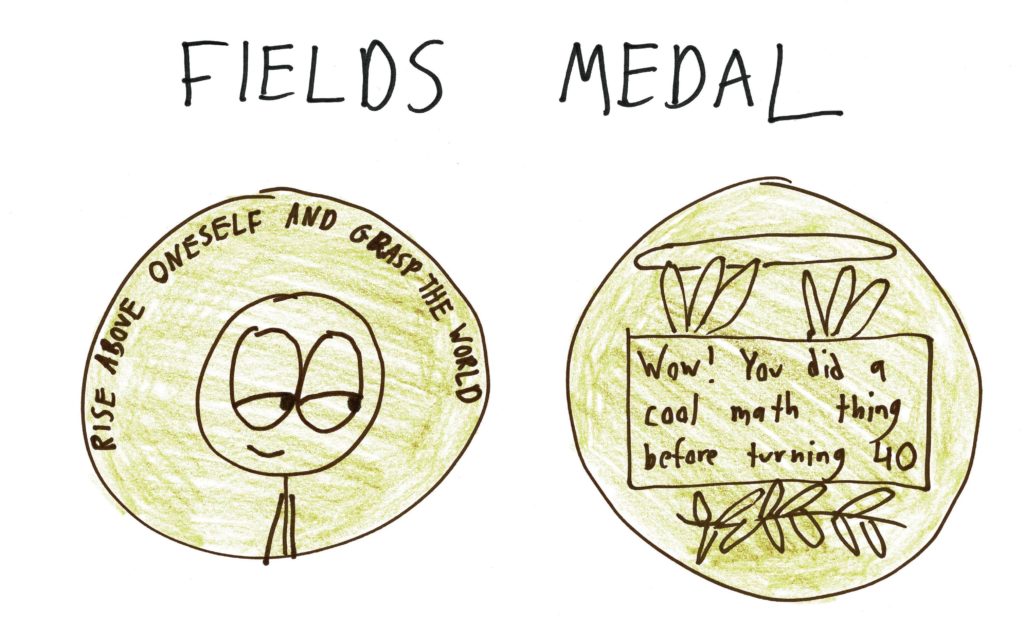 Given to a quartet of mathematicians every four years since 1950, math’s most famous prize honors exceptional work done before the age of forty. The prize money: $15,000 Canadian.

If the age cutoff strikes you as arbitrary, and the low prize as peculiar, then congratulations! You’re quite right. The Fields began life as a way to honor early-career research that showed the promise of future breakthroughs. Only later did it take on the role of “top prize in mathematics.”

According to math historian Michael J. Barany, the trope that the Fields is the “Nobel of Math” dates to 1966, when Stephen Smale traveled to Moscow to collect his medal. The spectacle of a vocally anti-war academic traveling to Russia in 1966 didn’t sit too well with the American establishment. So, in an attempt to explain to the wider public the importance of Smale’s prize, mathematicians across the country began referring to the Fields as the “Nobel of Math.” The shorthand stuck. 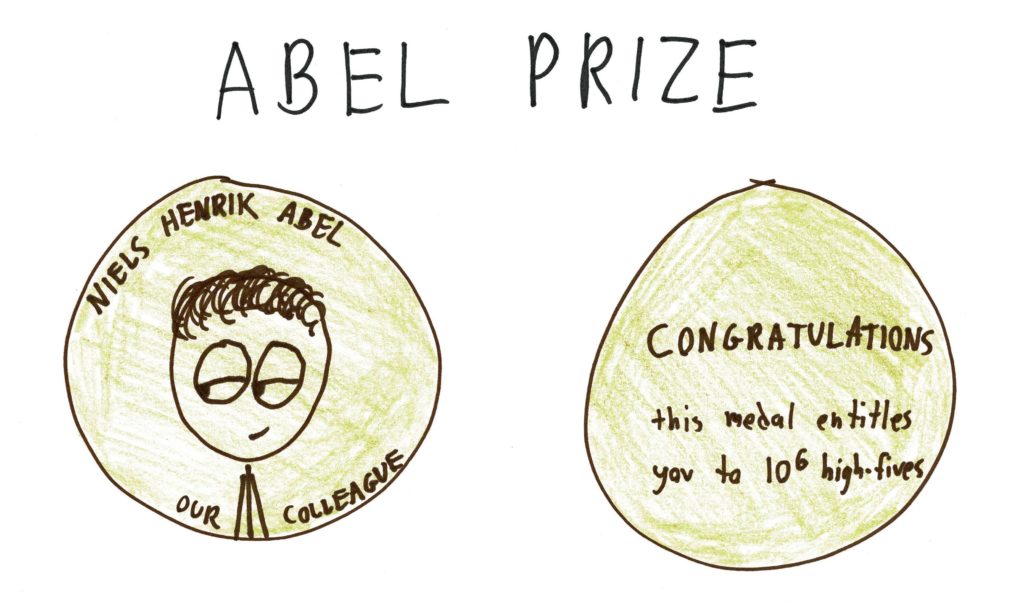 First awarded in 2003, the Abel honors “contributions of extraordinary depth and influence” in mathematics. By eschewing an age requirement (and boosting the prize to Nobel-level money), it fills the gap created by the Fields.

That makes “Abel” a peculiar choice of name; after all, Niels Abel made his algebraic breakthroughs in his early twenties. He died at 26. But the prize name goes back to 1899, when Norwegian mathematician Sophus Lie (a legendary figure himself) advocated for such an award. Reviving the idea a century later, Norway saw fit to keep the name. 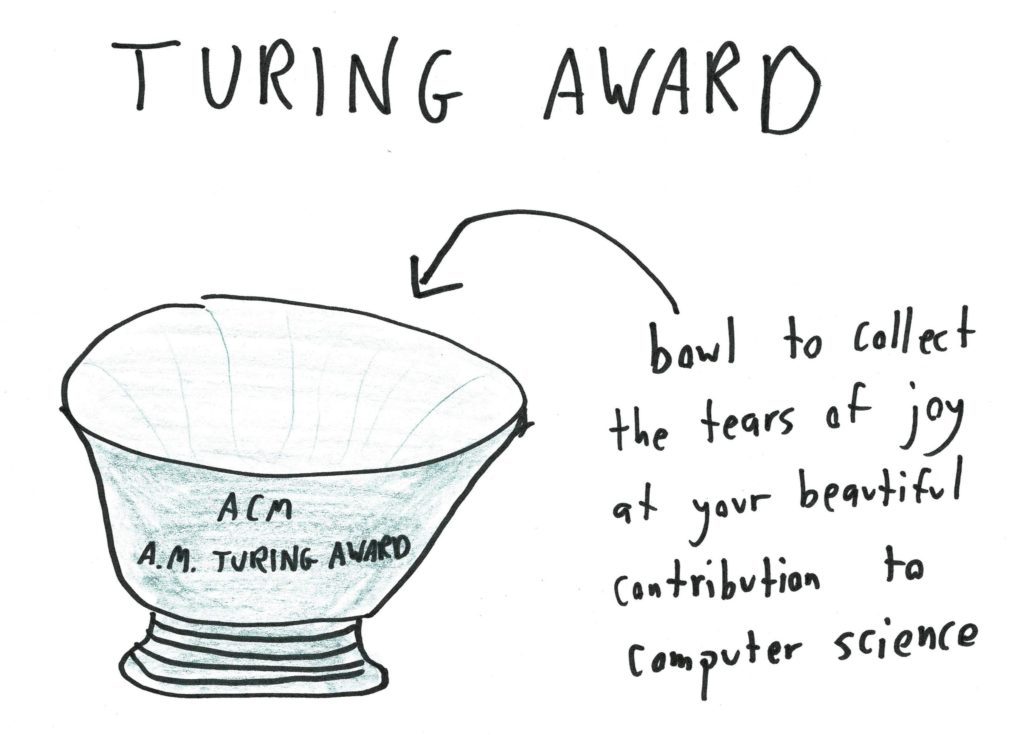 First awarded in 1966, the prize honors contributions of “lasting and major technical importance to the computer field.”

You might imagine “Turing” was a controversial choice of name at the time; Turing had died a decade earlier after a humiliating prosecution for the crime of homosexuality. But as ACM president Vicki Hanson recounts, records from the time show little controversy. It’s testament to Turing’s extraordinary influence: whatever the anti-gay sentiments of the time, everyone knew his name was a worthy one. 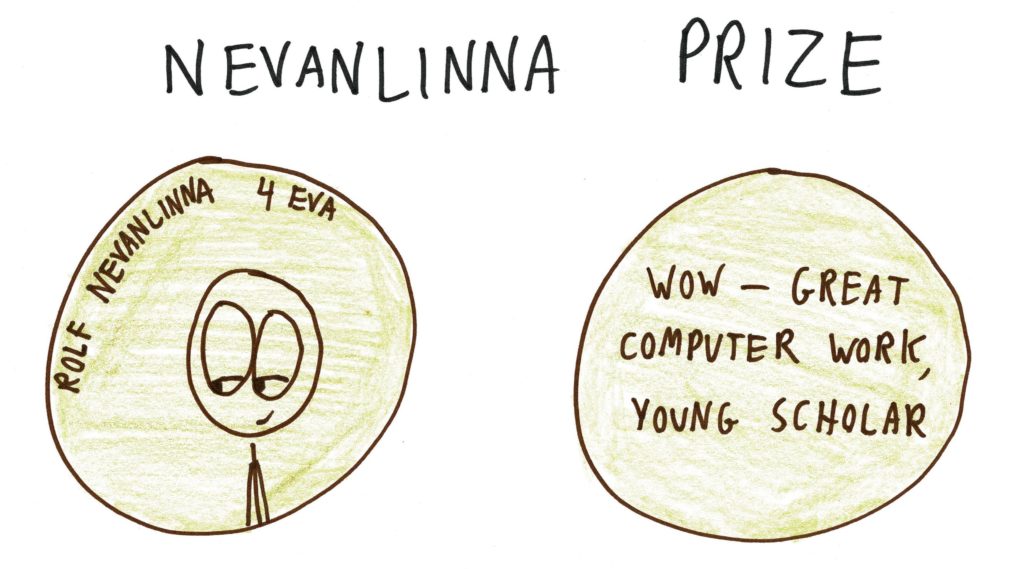 In crude shorthand, it’s a Fields Medal for computer science: awarded by the same body (the International Mathematical Union) on the same timescale (every 4 years) with the same age requirement (a maximum of 40) to a researcher for “outstanding contributions in mathematical aspects of information science.”

However, whereas the Fields goes to 2 to 4 recipients, the Nevanlinna goes to just one. 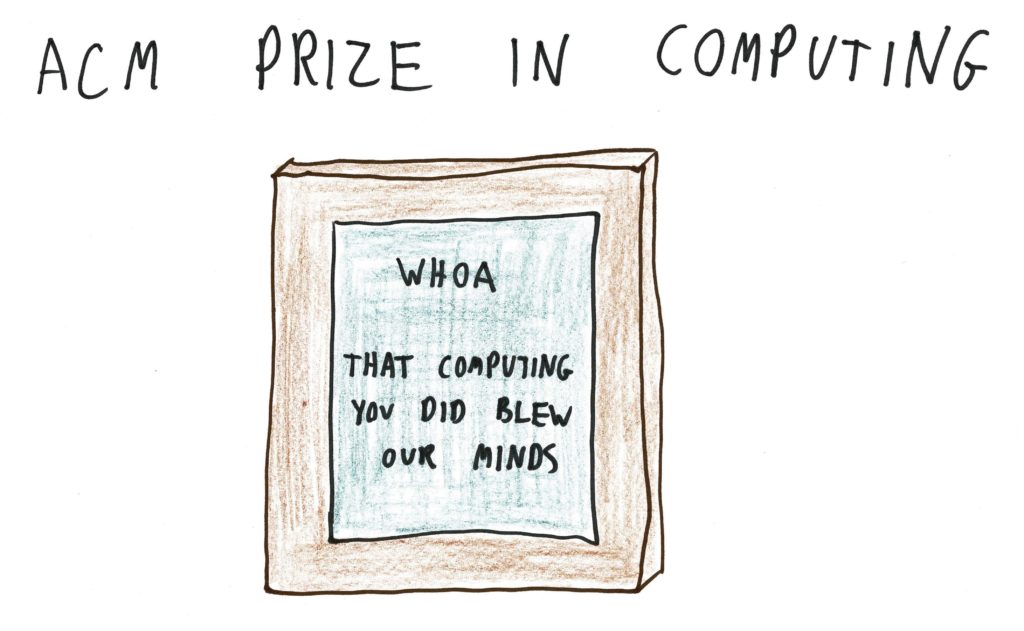 A bit like a Nevanlinna prize, except yearly, this award honors “an early to mid-career fundamental innovative contribution in computing that, through its depth, impact and broad implications, exemplifies the greatest achievements in the discipline.”

In all, you can see that in math and computer science, no single award does the work of the Nobel. To earn an honored spot at the scientific Lindau Laureate Meetings, you need a Nobel. At the math/CS-focused Heidelberg Laureate Forum, any of these prizes will do.

And, if you ask me, that’s for the best.

Prizes are an awkward fit for the world of research, where there’s no playoff season, no championship game, nobody voted off the island, no obvious “winner.” By definition, great discoveries lack precedent. No two breakthroughs are alike, no two researchers interchangeable, and to assert their equivalence is just plain silly. 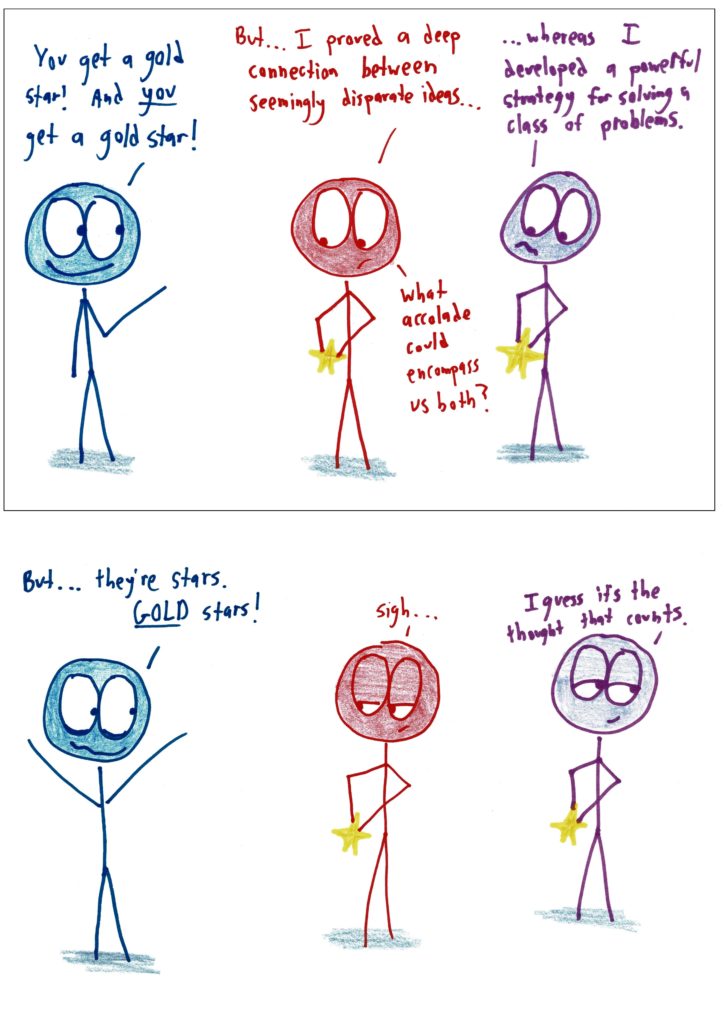 But just because prizes are arbitrary doesn’t mean that they’re worthless. They shine bright (if uneven) lights on work of exceptional value, punctuating the grind of research with moments of warmth and ceremony. The multiplicity of math and computer science awards serves (if only accidentally) to honor the sprawling truth of human inquiry, better than the singular, Oscar-esque Nobel.

Case in point: In 1994, when Andrew Wiles capped a centuries-long search for the solution to Fermat’s Last Theorem, he was 41. Too old for the Fields, too young for the not-yet-existent Abel. Would the official organizations let the century’s most dramatic mathematical discovery go unrecognized? What could the IMU do?

Simple: they gave Wiles an ad hoc prize, a silver plaque. It stands alone in the annals of achievement.

The same goes for all research, not just prize-worthy breakthroughs. Every act of discovery, no matter how humble, leaves its signature on the document of human thought. By nudging forward the human understanding of reality, it makes winners of us all.