I’m an American, born and bred. I revere the 14th Amendment, root for the New England Patriots [dodges rotten fruit], and can rattle off all 44 presidents.

Yet here I find myself, in Birmingham.

In some ways, it’s not so different. As my friend John advised before I moved: “The British speak English, care about money, and yell about politics. You’ll barely notice you’ve left.” But it’s not quite like home: the spellings, the roundabouts, the big red buses—and, most relevant for a teacher like me, the sometimes startling differences in the ways our two countries educate kids.

In less than a year of teaching, I’ve encountered some surprising disparities, each of which prompts the obvious question: Which way is better, the British or the American?

I have nothing to gain by these comparisons. If I favor America, my judgments will be dismissed as jingoism (just like 97% of the other things I say). And if I favor Britain, I will have my surrender lorded over me for months to come by English teenagers. Thus, I find myself in a predicament similar to many facing America today: a lose-lose situation. And, in the true American spirit, I shall plunge forward anyway.

In the future, I hope to tackle trivial little issues, such as university majors and the nature of secondary education. But this week, I began with the big stuff: mathematical naming conventions. 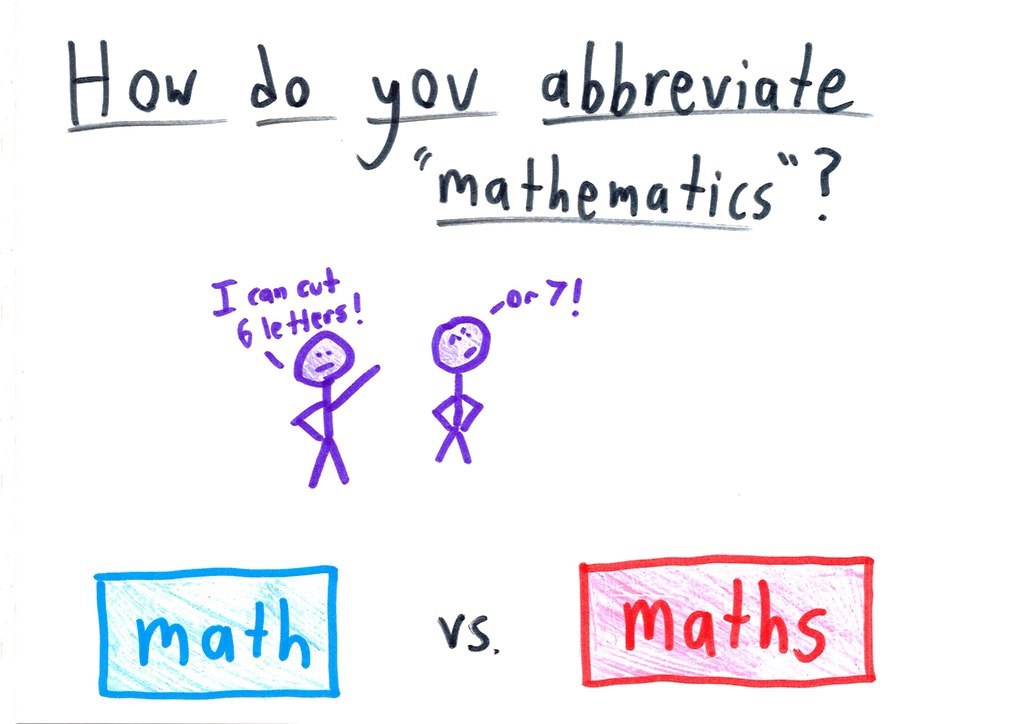 These are interchangeable. If you find anyone claiming a strong preference for one or the other, tell them to do take a deep breath, walk away, and go do something beautiful. Watch a sunrise, listen to a Beatles album, punch an investment banker—anything to remind you that life has meaning beyond misplaced pedantry. 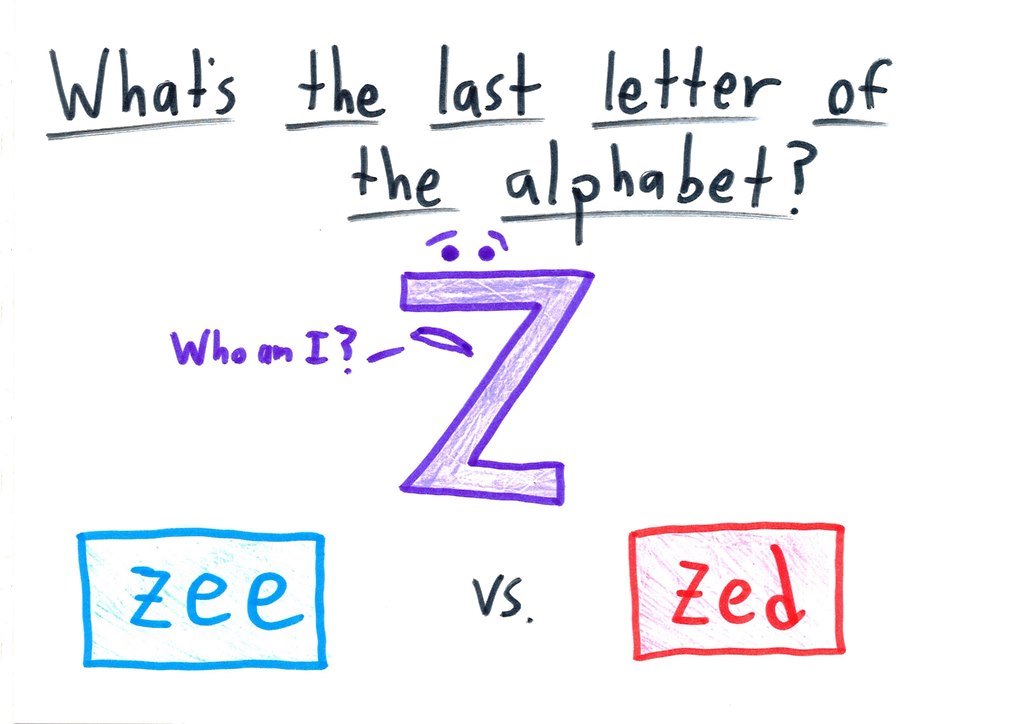 Yeah, this isn’t a mathematical difference so much as a linguistic one, but z is the third-most common name for a variable, so it comes up daily. Six months in, I’m already loving the “zed.” The alphabet is overloaded with “ee” letters (B, C, D, E, G, P, T, V). “Zed” is fresh. It’s different. It’s like the single onion ring in your order of French fries. 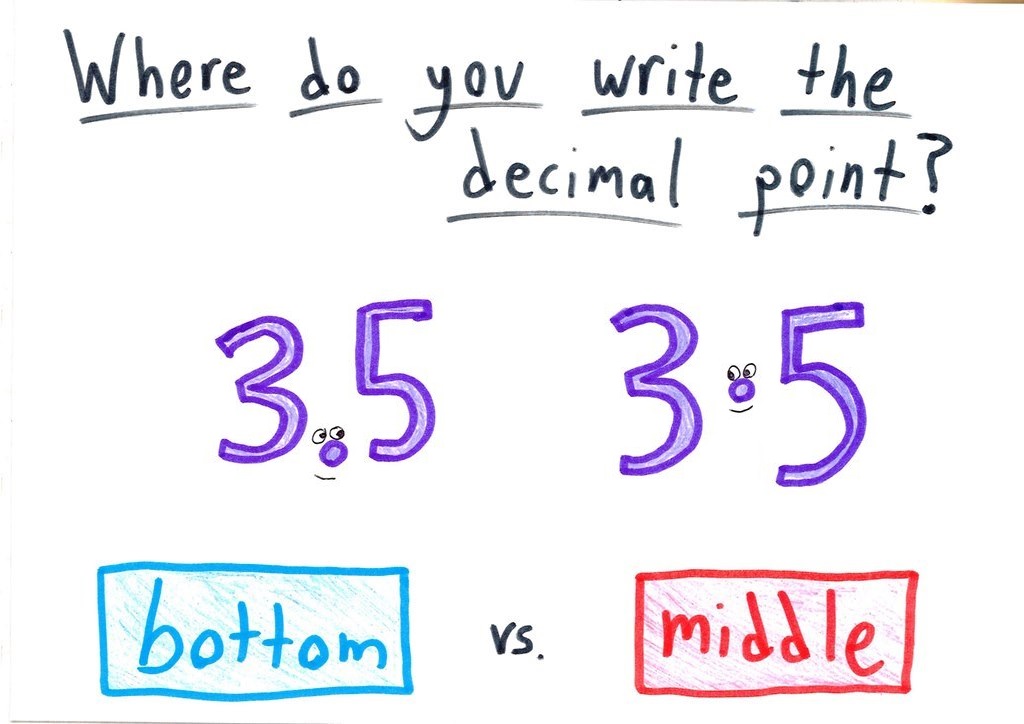 Welcome to my nightmare.

Multiplication comes up a lot in mathematics. Like, a lot a lot. To save time, we’ve developed the convention of omitting the multiplication symbol altogether (hence “2y” for “2 times y”). Sometimes, of course, this isn’t possibly (you can’t write “23” for “2 times 3”), but writing traditional symbol X would be confused for the variable x. So we use a simple dot instead.

Here’s the problem: My British textbooks still use that central dot to represent a decimal.

What does this mean? It means that multiplication haunts my days. When I tried to introduce the dot for multiplication, my students freaked out. (Even if they hadn’t, I’d still be wary of putting them at odds with their own countrymen by forcing different conventions on them.) So I settle for X instead. To avoid confusion I must (grudgingly) change the way that I write the letter x. I hate it.

After seeing this post, some colleagues (aged 23 and 28) pointed out to me that they never put the decimal in the middle. “Maybe it’s a generational thing,” they suggested. But if that’s the case, then it’s not just me who prefers the American way; it’s British people too. 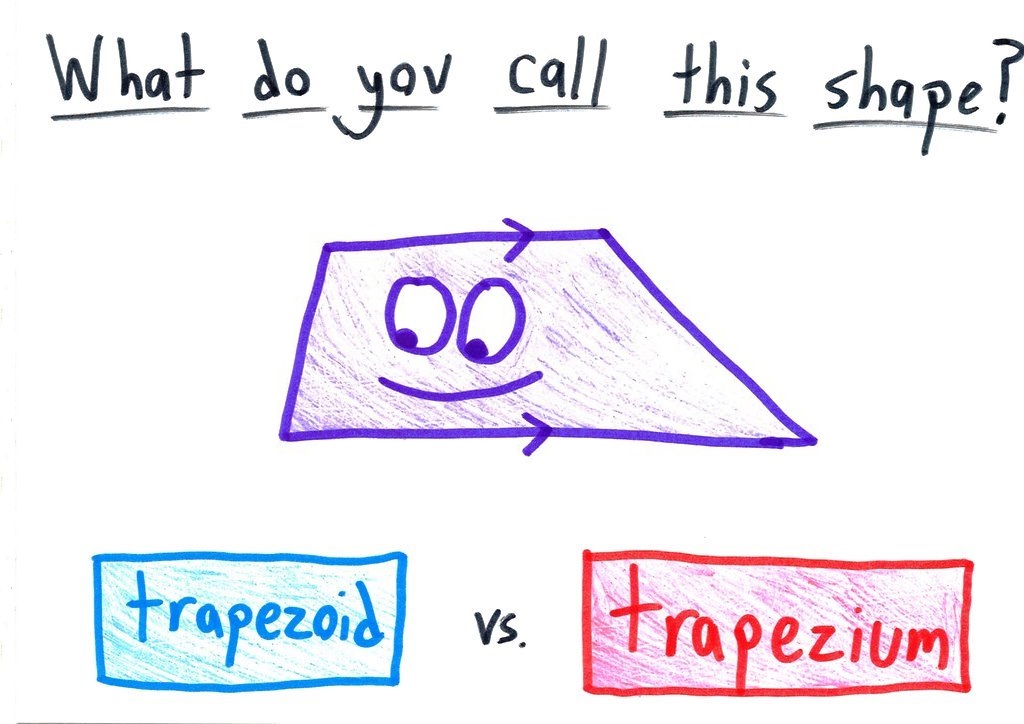 Many problems in America are diffuse. Cultural. Institutional. It can be hard to assign blame to specific people. But there’s a single villain behind the word trapezoid: Charles Hutton.

Historically, “trapezium” referred to a four-sided shape with one pair of parallel sides, while “trapezoid” referred to a four-sided shape with no parallel sides at all. As the erudite John Cowan explains: the “trapezium” looks like a trapeze, and the “trapezoid” has a shape “analogous to, but not the same as, a trapeze (as with humanoid, planetoid, factoid).”

So what’s Hutton’s problem? When he wrote his (otherwise wonderful) mathematical dictionary in 1795, he switched the two words. Americans inherited the blunder.

(Yes, I know the British don’t say that. I’m just trying to divert attention towards a debate where we’re on better footing than the trapezium thing.) 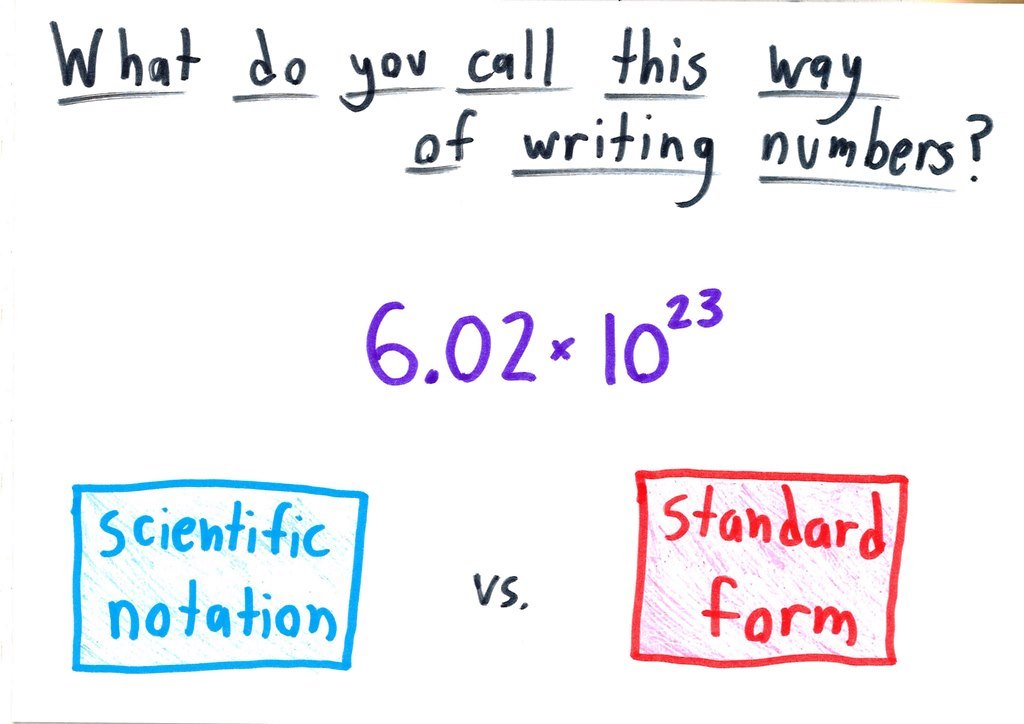 You know who uses this notation? Scientists, that’s who.

And you know what standard numbers look like? They look like numbers, British people. There’s nothing “standard” about this. 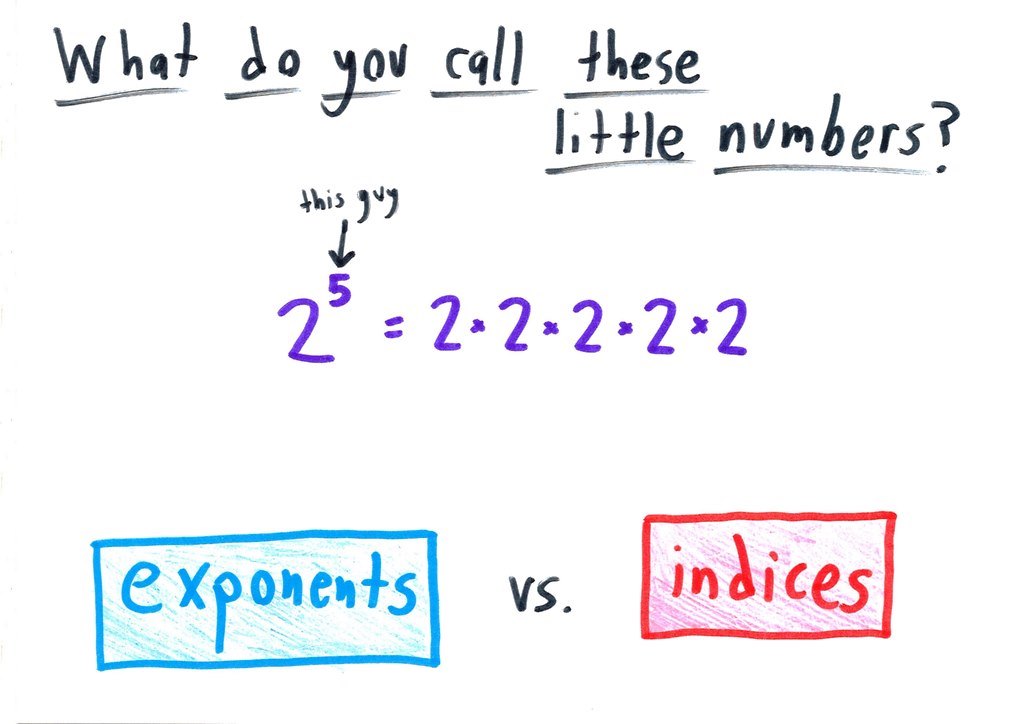 This is unforgivable. The word “index” already has a perfectly distinct mathematical meaning, and the word “exponent” has none. It would be like referring to “division” as “subtraction.” We already have a meaning for that word, British people. You do Shakespeare a dishonor.

(In their defense, the British also recognize the word “exponent,” but they seem to default to “indices.”)

Also, most gratingly, the plural “indices” is often gives rise to the bastard singular “indice.” What the heck is an indice, Britain? Will you please stop saying that? 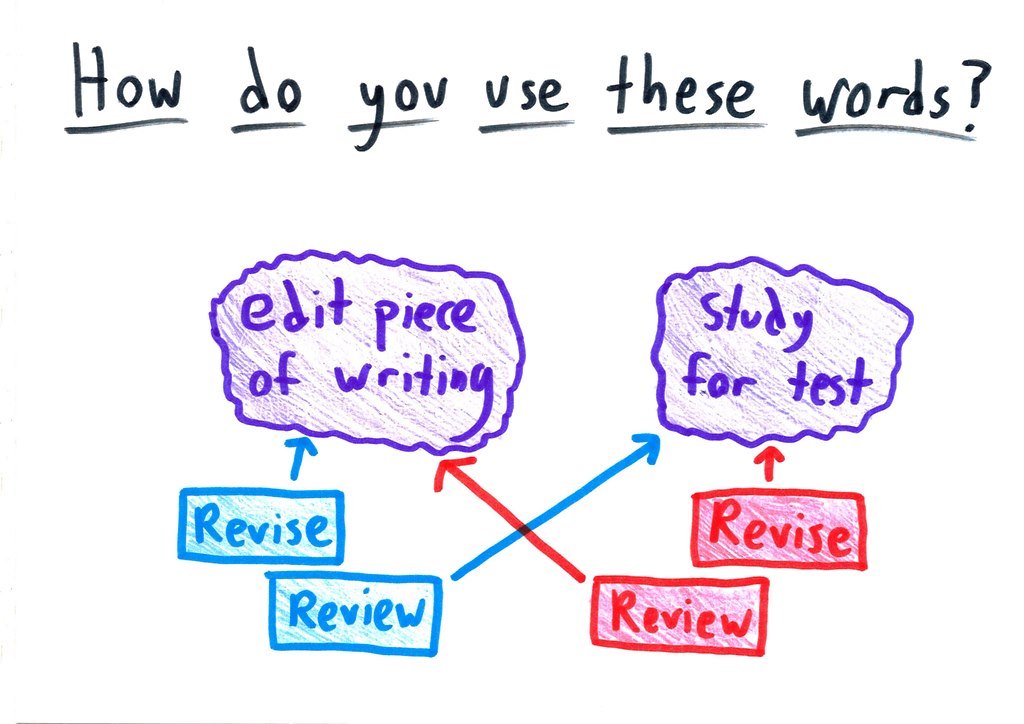 Americans revise their essays and review for tests.

The British review their essays and revise for tests.

It’s a disarming adjustment to make when you hop the Atlantic. But since “vision” and “view” mean basically the same thing, it’s hard to pretend that this makes one iota of difference. 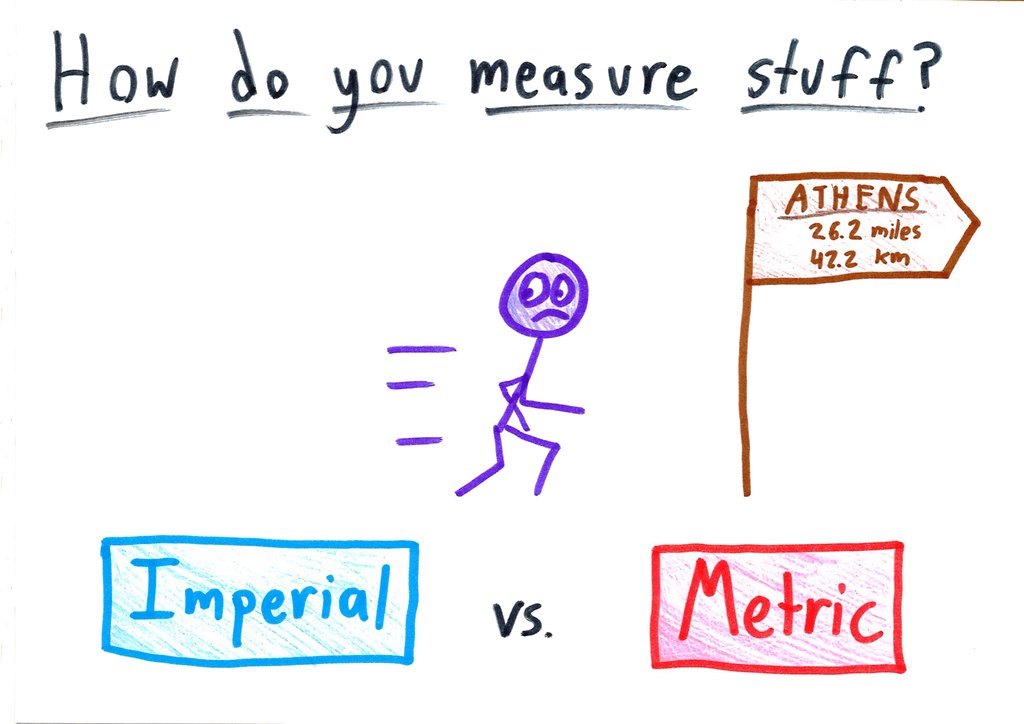 This happened with friends: Some Americans and some Europeans were sitting around, shooting the breeze, when the topic of measurement came up. “How many feet in a mile?” a European asked. “It’s about 5000, right?”

“Five thousand, two hundred, and eighty,” the Americans all recited in unison. The Europeans broke into laughter that was spontaneous, derisive, and utterly justified.

There’s no defense. We are fools.

Yes, it’s hard to change systems, but the rest of the world managed it, whereas we in America continue to rear the next generation in our own scientific filth. 12 inches per foot, 3 feet per yard, 1760 yards per mile… 8 ounces per cup, 2 cups per pint, 2 pints per quart, 4 quarts per gallon… Our teachers have to teach this stuff. Our kids have to learn it. I love America’s spirit of independence and individuality, but this is ridiculous. Mothers like to ask, would you jump off a bridge if everyone else was doing it? The question here is, why are we jumping off the imperial measurement bridge when no one else is doing it? I guess we want to be special, distinctive little bridge-jumpers.

Yes, I expect to have my passport revoked in retaliation for such anti-American blasphemy, but there we are.

But, before we bow down before our British overlords, guess what? They don’t always use the metric system either! Yes, they use Celsius instead of Fahrenheit, but that one doesn’t really matter, because in daily life you never do unit conversions involving temperature. When it comes to the big ones, the Brits are wildly inconsistent. They mostly use kilograms, but will occasionally bust out “stones” (which are 14 pounds each). They use “metres” for short distances, but revert to miles for long ones. Yes, they’re “more metric” than Americans, but has no one told them that the whole purpose of standardized units is, you know, standardization and consistency? At least we’re sticking with our system, instead of hopping back and forth.

Winner: Draw. Or, well, both nations lose, but in different ways. 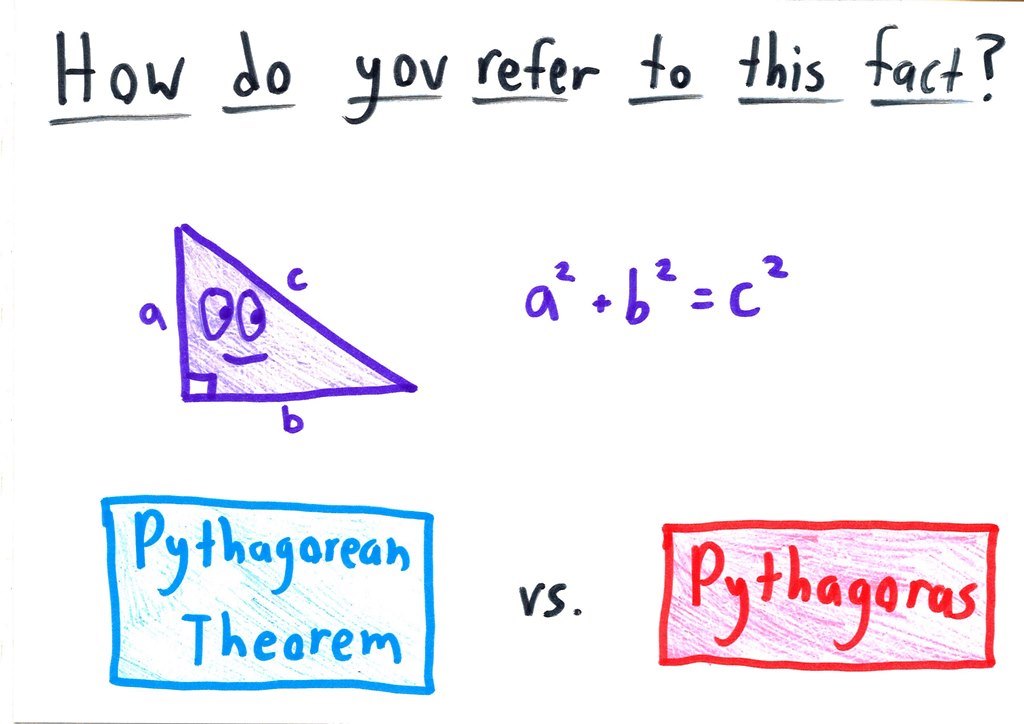 Whereas Americans refer to “The Pythagorean Theorem,” the British simply invoke “Pythagoras.”

I don’t really care. The British version is less of a mouthful, I suppose. It’s also wonderfully insane: When you say, “We can solve this using Pythagoras,” you’re effectively suggesting that a Greek man who’s been dead for 2500 years will personally stop by to help solve your math problem. 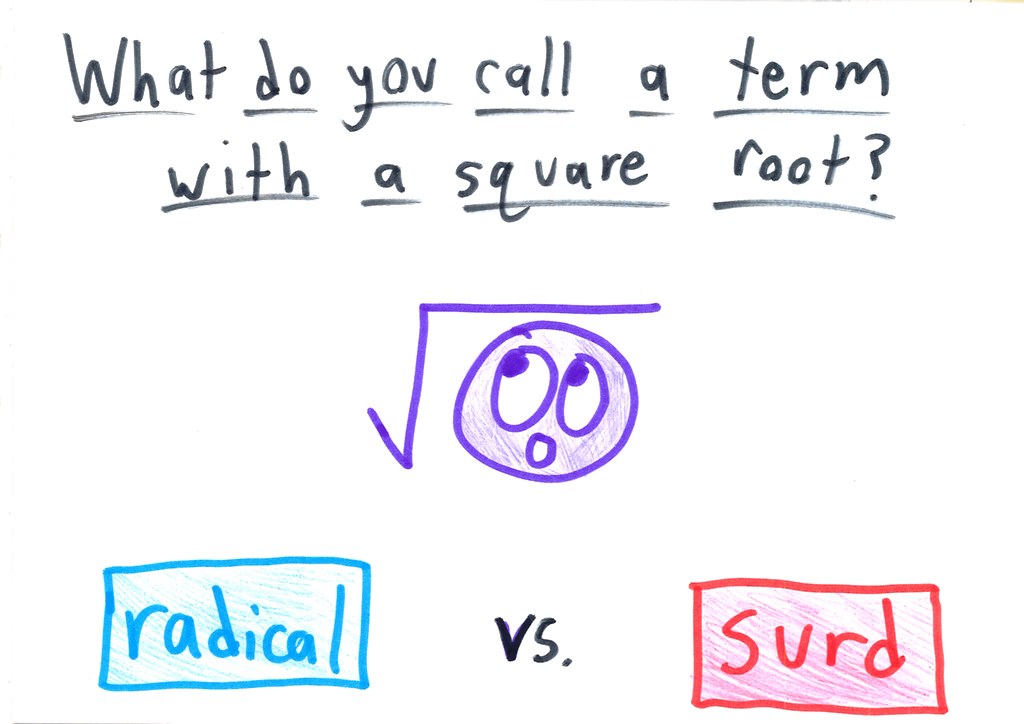 What I love is that these both capture the insanity of irrational numbers. Americans think they’re radical; Brits think they’re absurd; and according to legend, the Pythagoreans find them so disturbing that they’ll kill anyone who dares discover them.

These words also perfectly capture the flavor of their respective countries, which is to say, the US is a nation of skateboarders, and the UK is a nation of Latinists. 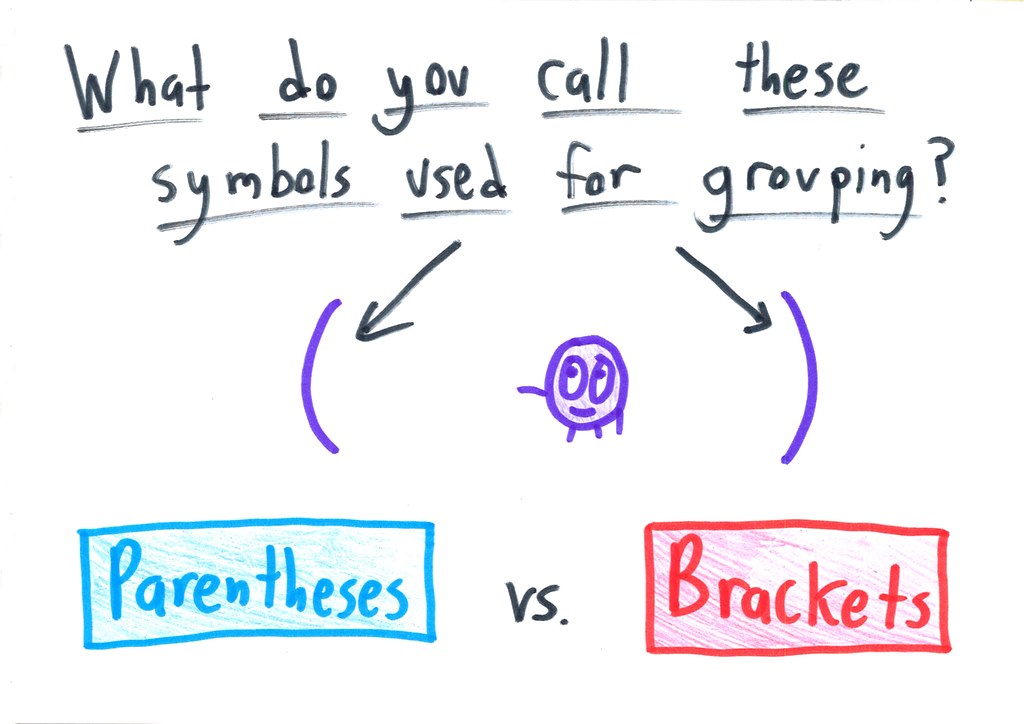 To the British, ( ) are just a special case of the many types of brackets, also including { } and [ ]. To the Americans, they’re different.

Yes, the singular “parenthesis” is often mislaid by Americans. But I like the adjective “parenthetical,” as in “a parenthetical remark” or “when it comes to discussing important mathematical issues, the choice of symbols is, at best, parenthetical.”

Winner: Draw. I apologize for my indifference; it’s far too British of me, innit? 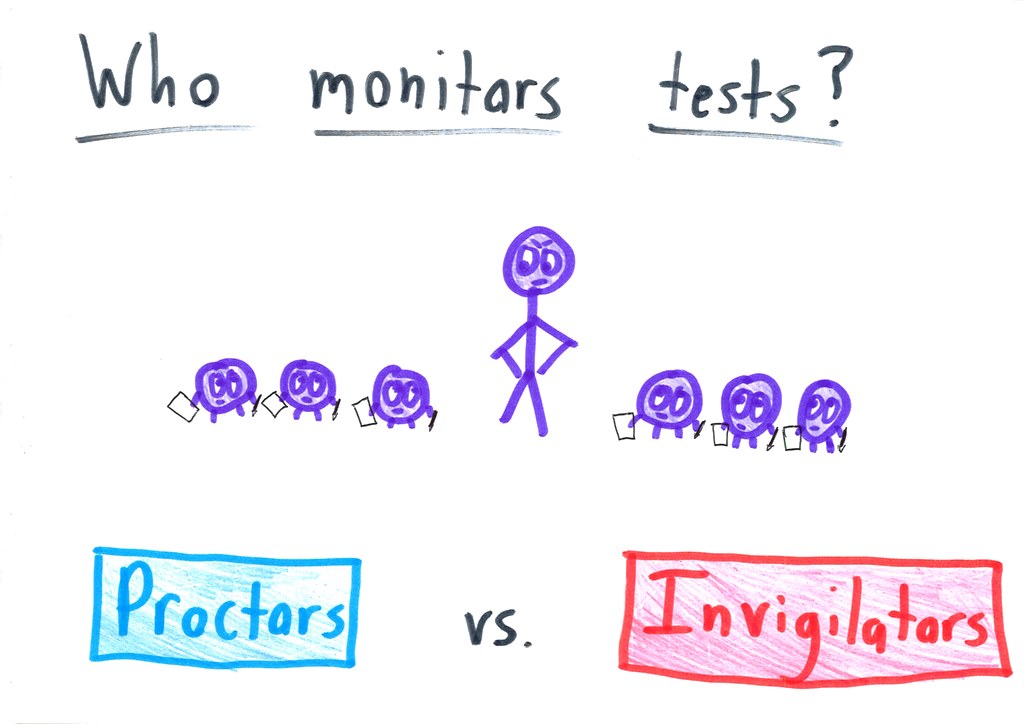 I’ve been proctoring tests for years, and only this year did I get the distinct pleasure of invigilating one.

It’s delightful, invigilating. You hold vigil. You, in fact, bring the vigil. You inject vigil into an otherwise vigil-less exam room. It’s like being an Invigorator. 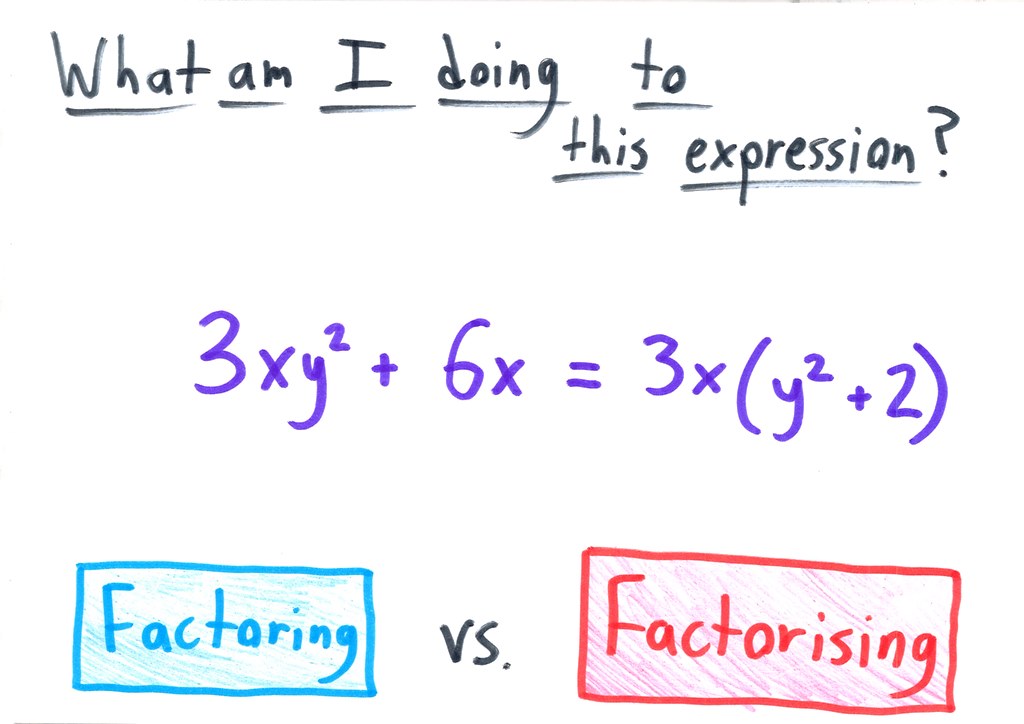 You hear both words in both places, but the UK leans towards -ising, whereas the US is happier to use “factor” as a verb.

If you care about this, then congratulations! You are probably the sort of person who can turn on any sport – up to and including the Little League World Series and youth cricket – and immediately find yourself a passionate supporter of one team or the other. Which is to say, you care too much about stuff, dude. 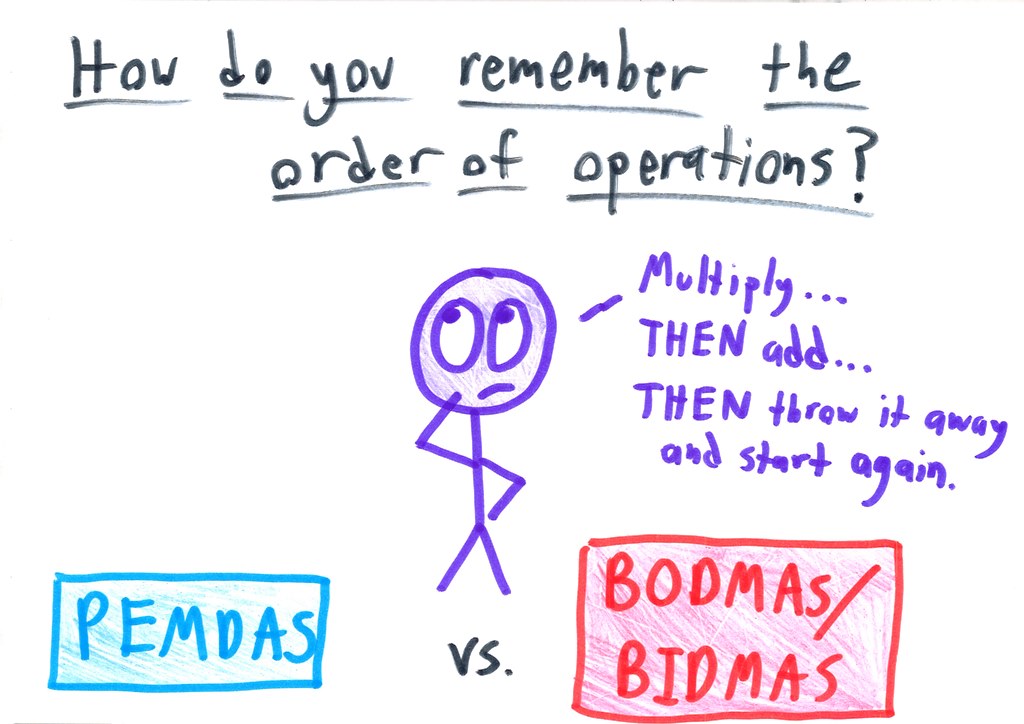 Hey Britain, what’s the point in having an easy-to-remember mnemonic if everyone uses a different one? BIDMAS, BODMAS, BEDMAS, BIMDAS… yes, you could argue that the variety of acronyms reflects the arbitrariness of the convention, but that’s a cheap argument. You’re better than that.

FINAL SCORE: USA wins! At least, until someone points out to me another difference that “favours” the UK, at which point it will be back to a comfortable stalemate.

113 thoughts on “US vs. UK: Mathematical Terminology”